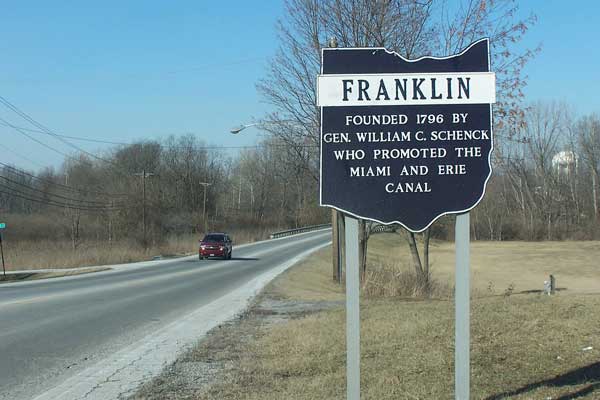 We at Lebanon Heating & Cooling are proud to serve the residents of Franklin, (and those in surrounding communities) with a superior level of customer service that our competitors can’t match. In each and every visit we make to area homes, we strive to make sure each and every customer has a Five Star Experience ‒ each and every time; 100% Satisfaction Guaranteed!

Located in Warren County, Ohio, the City of Franklin has a population of around 11,700 people. Named after Benjamin Franklin, the Great Miami River runs through Franklin, which has Interstate 75 running along its east side. Franklin was founded in 1796, by General William C. Schenck. In 1814, it was first incorporated and then it earned its designation as a city in 1951.

One of Warren County’s first four post offices was established in 1805 in Franklin in 1805, with John N.C. Schenck, brother of General Schenck, serving as the first postmaster. Although in a new location, the Franklin Post Office still stands in Franklin and is one of four sites in Franklin that has earned a listing on the National Register of Historic Places. The Mackinaw Historic District is another historic landmark.

Between 1825 and 1845, construction of the Miami and Erie Canal took place and followed the Great Miami River through the city. New boat traffic from this generated new commerce, and it wasn’t long after that Franklin had a pork slaughterhouse, a sawmill, a barrel-making factory, and a whiskey distillery.

Franklin’s first mayor was Dr. Absalom Death. He was elected in 1837 at a tavern meeting Dr. Death was one of two doctors in Franklin history to have the unique legal name as “Dr. Death.” The first later went on to Cincinnati to become the director of a medical college.

With the completion of a railroad depot in Franklin in 1872, the town further prospered. By 1890, Franklin had five paper mills. However, in 1896, Franklin’s economy suffered a setback when its only bank crashed. Historians say long time teller who was highly entrusted had embezzled vast amounts of money, which negatively affected the fortunes of numerous businesses and individuals

In 1971, Franklin opened the world’s first garbage-recycling plant, something that was designed and built by the Black Clawson Company. The plant used recovered paper to make roofing material and recycled metals from solid waste.

In 1989, a café owner in Franklin, Ronald Peters, was reputed to have been the principal bookmaker for baseball player Pete Rose, who was kicked out of professional baseball for a gambling scandal.

In 2015, Franklin saw the opening of the Museum of Spiritual Art.

We at Lebanon Heating & Cooling are honored to serve the people of Franklin, Ohio, (as well as neighboring communities) with a distinguished level of customer service that is second to none. We go to great lengths to ensure our customers enjoy a Five Star Experience ‒ each and every time.